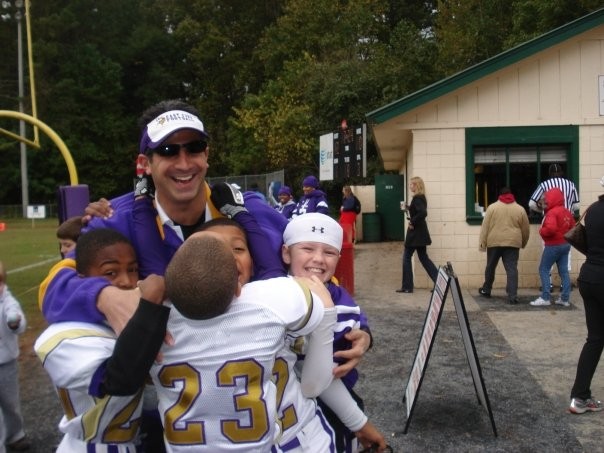 I’m sure you can relate to this one…

When the s**t hits the fan, fingers start getting pointed and the blame game begins…

This seems to be a pretty common theme with businesses we encounter, especially during the growth spurts.

So why is it that individuals don’t usually accept responsibility for themselves, their actions or lack of actions, and feel compelled to point fingers to release them from the blame when something goes wrong or when something isn’t working?

In my experience, the answer is simple.

Here’s a great example… I once was an offensive coach for a youth football team a little over a decade ago.

(Just a side note: if you love sports, and can make the time, I highly recommend volunteering to be a youth coach for a sport you are really passionate about… it was one of the most rewarding experiences I had the opportunity to invest my heart, time, and energy in. Some of these kids had no one in their life they could turn to or count on or to even give them positive direction and guidance).

One of the things that we continually emphasized to every player on the team was that EVERYONE on the line has to take the step in the right direction when the offensive line is blocking the quarterback.

If just one person mis-steps and goes in the wrong direction, the quarterback is going to get sacked.

Can you imagine how the same thing happens in business?

Oftentimes, we operate in silos and don’t communicate or collaborate as a team unit as effectively as we could. The result can lead to unclear direction, overlooked steps, and either delayed or failed implementation.

The vital component in overcoming this challenge is to create a culture of positive accountability.

The secret in positive accountability has everything to do with its unique structure. Not only is it exercised top to bottom (like most traditional companies are structured), it’s also exercised sideways, crosswise, bottom to top, and diagonally.

Everyone holds everyone accountable.

One thing I think we’ve done exceptionally well at Business Nitrogen is recognize team members who do amazing work internally (those actions that go above and beyond what even our clients recognize).

In fact, last year we integrated something called “snaps” (and I can’t take credit for this idea, it all goes to Chris Tuff, author of The Millennial Whisperer).

He says rewards and recognition are essential in any organization.

They don’t have to be financial either.

Chris calls out his team members in meetings, and gives them “snaps” for the good things they are doing in the company.

We then took it a step further…

We encouraged each team member to give “snaps” to other team members when they do something worthy of recognition.

We then added a quarterly award for the team member who got the most “snaps”.

A year after doing this (and giving a total of four awards), I can see the enormous impact that positive accountability has created within our team around our culture.

Going above and beyond had become “THE” standard amongst the team.

The team was happier than they’d ever been.

Everything was just BETTER.

For example…before, if something wasn’t going well, it wouldn’t be out of the ordinary if a team member didn’t say anything (maybe because they weren’t comfortable “calling out  or questioning another team member” or maybe for fear of causing resentment).

But ever since we established our core values and LIVE by them, the team has absolutely NO reservations holding other team members accountable, questioning things or reminding them something is missing, or something is due.

A perspective shift of what accountability REALLY means to our team.

Accountability isn’t looked at, or thought of, or taken as a negative within our team because the intention is different. It’s now, “I’m reaching out because I care” and “How can I help you with this so we can be successful?”

Now I want you to think about you and your team… is at least one thing I mentioned above worth trying to increase performance, productivity, and overall satisfaction?

If you’re interested, I’ve posted a behind-the-scenes (raw and uncut) look at one of our company meetings and how we integrate our core values in the fabric of who we are and what we do.

IMPORTANT: You must be a Business Nitrogen Elite Marketing Forum member to view it, so simply join HERE.

This is definitely one of them.